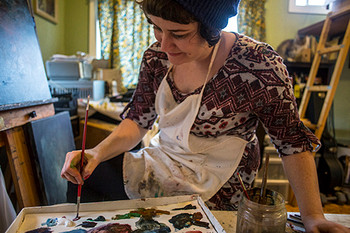 About the Artist
Photo Courtesy of Andy Abeyta, 2014
Claire Flint began painting at age seven, when her grandmother introduced her to watercolors. Primarily self taught since then, she has explored everything from realism to impressionism using many different media (charcoal, pastel, ink, watercolor, acrylic, oil painting, multi-media encaustic, fabric arts, and photography). She has also been an accomplished graphic designer and illustrator for the last eighteen years, ran a photography studio for 5 years, had over forty art shows across five U.S. states and has over 500 original greeting card illustrations in wide circulation today.
“My art is my therapy, my church, my friend, and sometimes my demon. The creative process helps me to integrate things about my life and the world around me in a way that makes it stick. I enjoy following my intuition, exploring unfamiliar territory, and that moment just after experiencing the terror and resistance of something new, when I can fall into a state of complete trust.”
In 2010 she was voted “Best Visual Artist” in the Eugene Weekly’s reader polls and was accepted into the Mayor’s Art Show for the first time.
Claire lives in Eugene, Oregon with her 8 year-old daughter Penelope “Penny” Lane and musically gifted husband Mike Last of the Stagger & Sway. She currently divides her time between mothering, painting in her home studio, illustrating children's books and working as a freelance graphic designer and illustrator for local publishing company Luminare Press designing book covers.